Get ready for the Florida Heritage Book Festival and Writer's Conference happening late September 2014. This is a super chance for literary lovers - both authors and readers. There will be tons of books for sale, plenty of educational opportunities, and the privilege to visit the one and only, beautiful Flagler College.

Being that JLB Creatives Publishing will be an active part of the festival, we'll be listing a festival "nugget" from the line-up every Tuesday and Friday right here on the blog.

A full day of one-hour writers workshops covering both the craft and business of writing. Take your writing to the next level with practical advice, solid instruction and a chance to network with your fellow writers. Registration includes the keynote luncheon with New York Times bestselling author Lisa Black.

Successful mystery novelist and writing authority Elizabeth Sims demystifies the mystery and shows you how you can start with a basic story idea and build a novel-length plot from there.  Gamache-Koger Theater

Posted by Unknown at 12:01 AM Links to this post


JLB Creatives Publishing is proud to reveal the cover of The Untold Legend: The Warrior Queen by author Amy I. Long. This romantic fantasy novel will be coming to bookshelves and e-readers very soon! 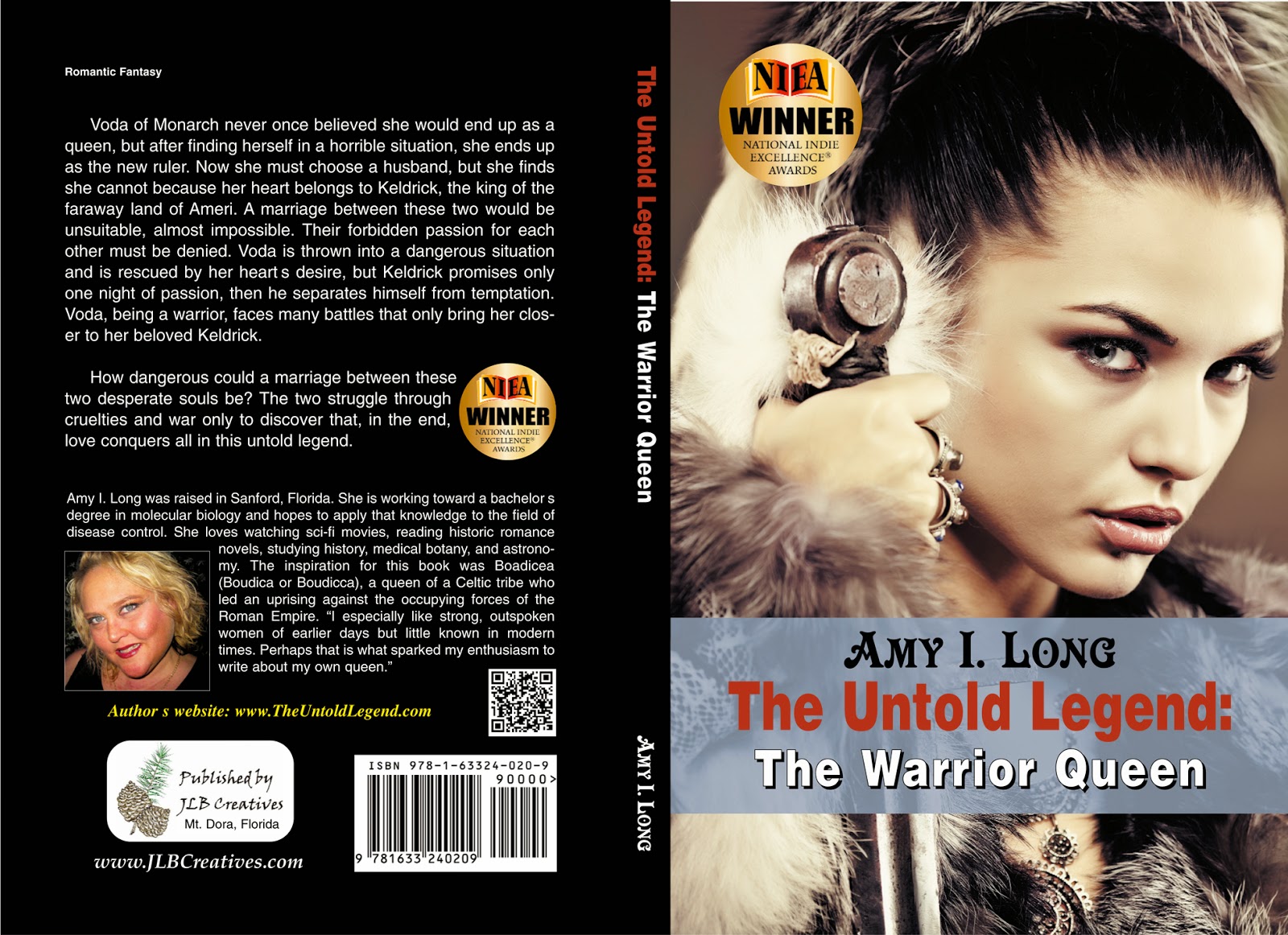 About The Untold Legend: The Warrior Queen
Voda of Monarch never once believed she would end up as a queen. Now she must choose a husband, but she cannot because her heart belongs to Keldrick, the king of the faraway . A marriage between these two would be unsuitable, almost impossible.

Inspiration for warrior queen
The inspiration for this book was Boadicea (Boudica or Boudicca), a queen of a Celtic tribe who led an uprising against the occupying forces of the . "I especially like strong, outspoken women of earlier days, but little known in modern times. Perhaps that is what sparked my enthusiasm to write about my own queen.” 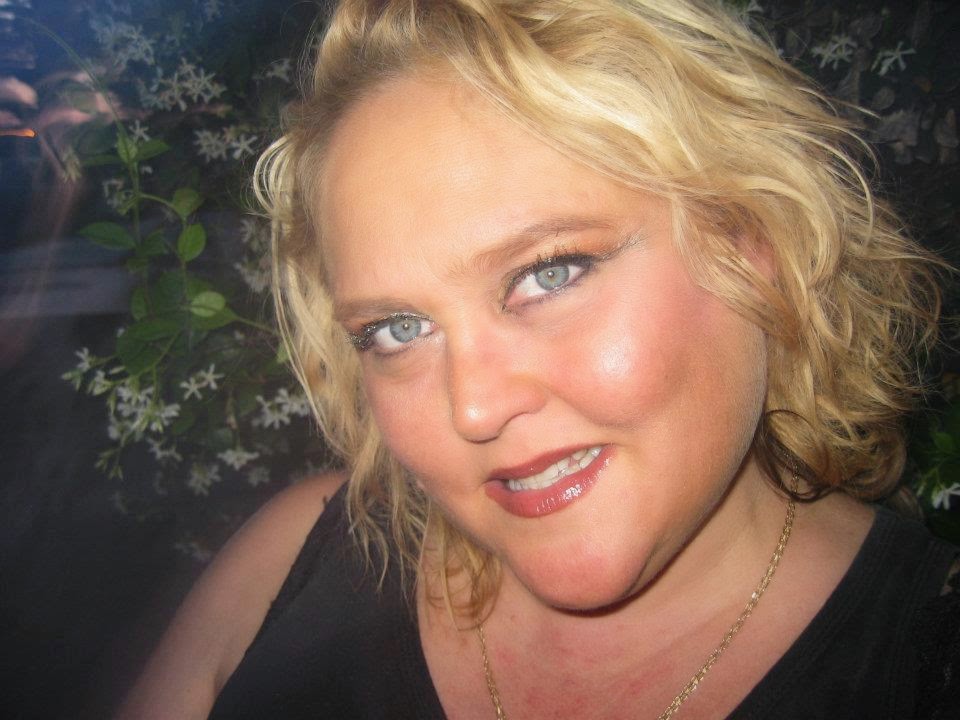 Amy I. Long was raised in . She is working toward a bachelor's degree in molecular biology and hopes to apply that knowledge to the field of disease control. She loves watching sci-fi movies, reading historic romance novels, studying history, medical botany, and astronomy.

Discover more great books on JLB Creatives.com and submission guidelines if you're an author seeking a home for your manuscript.
Posted by Elise at 12:00 AM Links to this post

On Wednesdays we're posting a photo taken by our CEO, author Janet Beasley to help inspire authors, painters, musicians, and other awesome artists. We've titled the new feature, "Spark Your Creativity." How did we come up with this? Read on...

When Janet isn't hard at work in the literary world, you'll find her and her husband kayaking the crystal clear, spring fed rivers of Florida. Janet's second passion next to writing is photographing nature as they glide through the serene settings these rivers have to offer. She and her husband also enjoy traveling the US, so you'll also be seeing some of Janet's 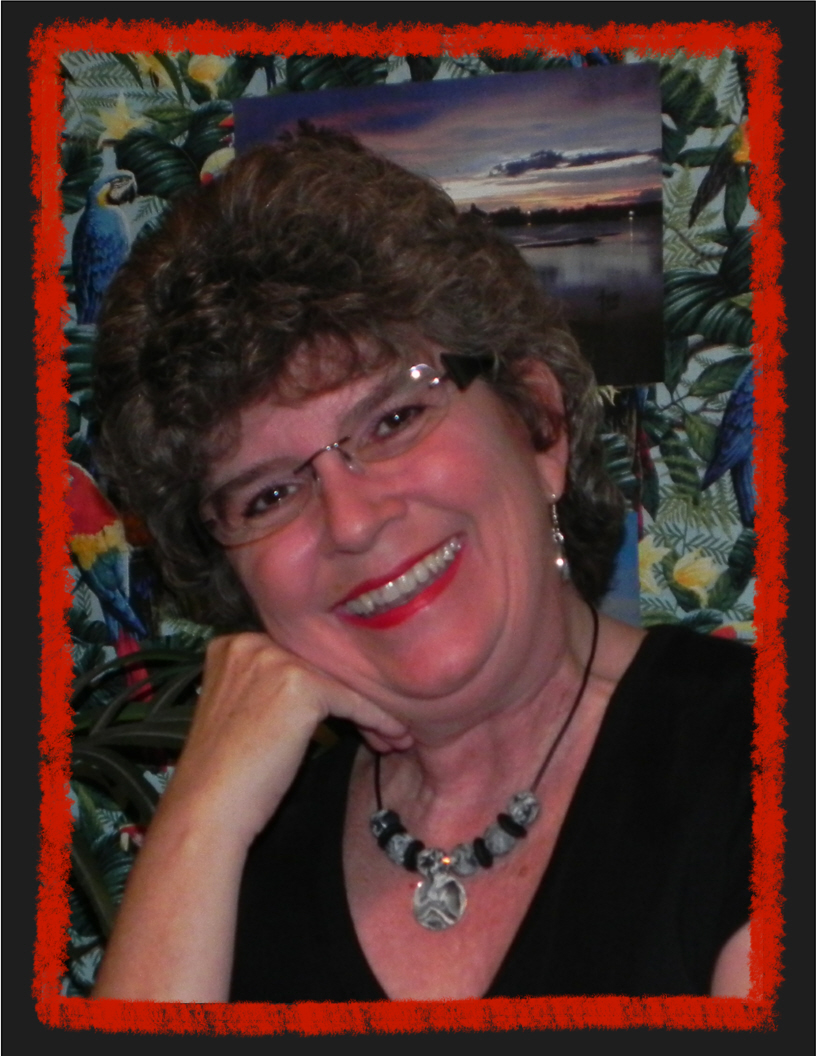 photos taken from hikes and journeys she and her husband have done nationwide. She has used her photos time and again for her own inspiration when it comes to many of her stories, and decided she would like to share the same inspiration with the literary and arts world.

And not to worry if you're not inspired this week, come back each Wednesday to catch a glimpse of what could "spark" your next amazing piece of work. And if you don't want to wait until next Wednesday, we'd like to invite you to visit our JLB Creatives Photo Gallery on Flickr where the photos are always free to download and use as book covers, business cards, wallpaper, etc. All we ask is that you give credit where credit is due - perhaps by something as simple as adding a credit link to the JLB Creatives/Janet Beasley Flickr site in your book or on your presentation.

We hope you enjoy our new Wednesday feature, "Spark Your Creativity." And we want to let you know, if a photo inspires you to write a story that you would like to have considered for publication by JLB Creatives Publishing, be sure to visit our website at http://www.JLBCreatives.com where you'll find our company's history, be introduced to the publishing team, discover our Submission Guidelines, and may submit your work for consideration.

Get ready, it's coming, and JLBCP is going to be a part!

Get ready for the Florida Heritage Book Festival and Writer's Conference happening late September 2014. This is a super chance for literary lovers - both authors and readers. There will be tons of books for sale, plenty of educational opportunities, and the privilege to visit the one and only, beautiful Flagler College.

Being that JLB Creatives Publishing will be an active part of the festival, we'll be listing a festival "nugget" from the line-up every Tuesday and Friday right here on the blog.

There is no single way to write a good book, but we all have to start at the same place by writing those first few pages. But how do we know how good they are, and if we’re on the right track?

The Conference Critique Workshops offer a day of inspiration, motivation and positive feedback from faculty members and fellow students in an intimate setting. Small groups of no more than 12 writers (select Fiction or Nonfiction) will come together to critique each other’s ten-page submissions. Workshop critiques for each individual will last at least 30 minutes, and workshop leaders will provide a written one-page critique to each student.

Please note: After registering for the September 25 Critique Workshops, your ten-page manuscript is due by Tuesday, September 2, in order to give us time to disseminate materials to the faculty and others in the workshop. They should be double-spaced and sent electronically to vic@fhbookfest.com

Laura Lee Smith -- author of Heart of Palm, second-place winner of the 2013 Florida Book Awards, General Fiction category; her work has appeared in New Stories from the South 2010, The Florida Review, Natural Bridge, Bayou; has taught creative writing at Flagler College and works as an advertising copywriter
Click here for bio
Posted by Unknown at 12:01 AM Links to this post

Cover Reveal: Lill and Mewe Journey to the Ocean of Runa 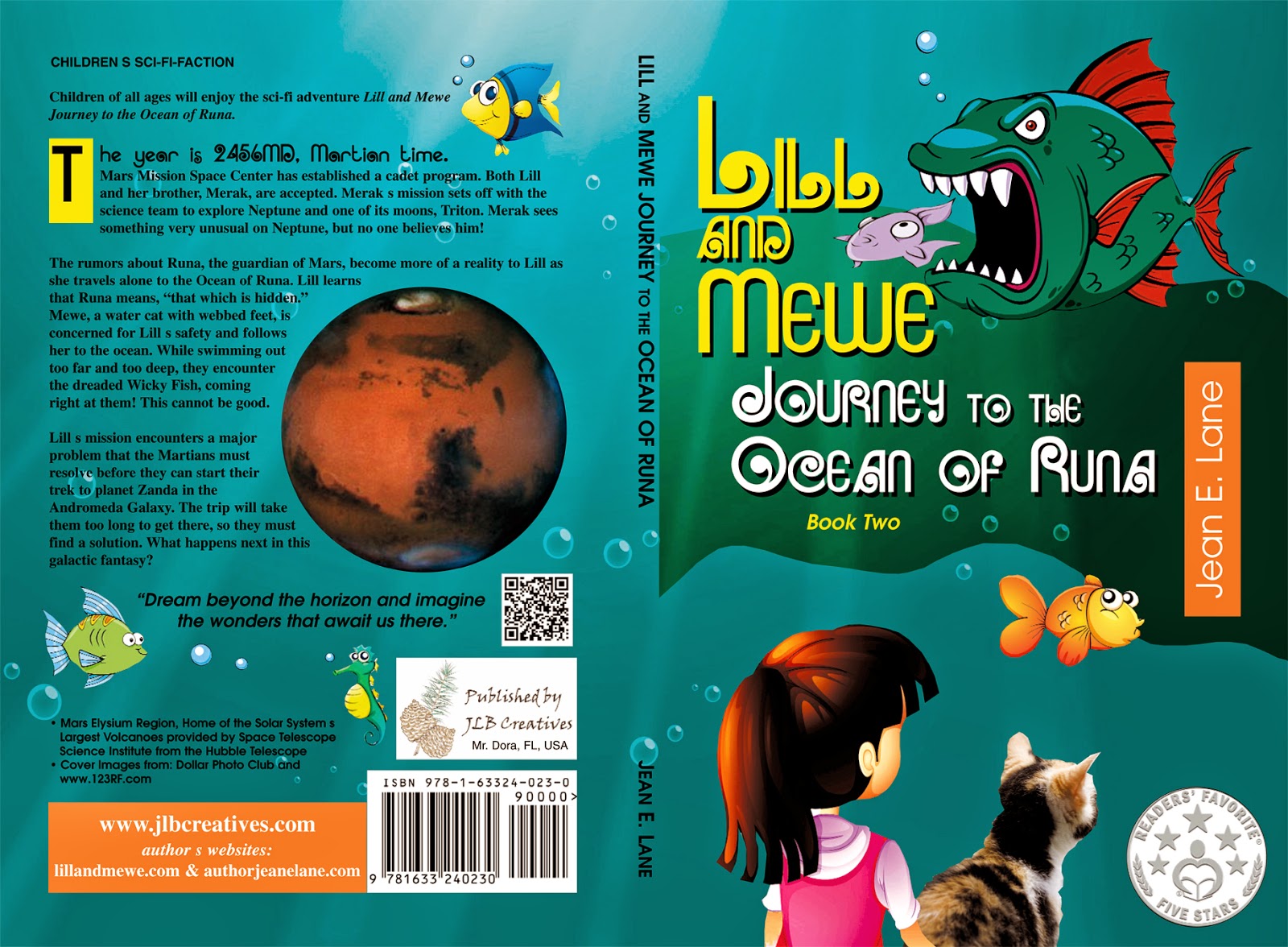 Children of all ages will enjoy the sci-fi adventure Lill and Mewe Journey to the Ocean of Runa. The year is 2456MD, Martian time. Mars Mission Space Center has established a cadet program. Both Lill and her brother, Merak, are accepted. Merak’s mission sets off with the science team to explore Neptune and one of its moons, Triton. Merak sees something very unusual on Neptune, but no one believes him!


The rumors about “Runa,” the guardian of Mars, become more of a reality to Lill as she makes the journey to the Ocean of Runa alone. Lill learns that Runa means, “That which is hidden.” Meanwhile, Mewe, a water cat with webbed feet, is concerned for Lill’s safety and follows her to the ocean. While swimming out too far and too deep, they encounter the dreaded Wicky fish, coming right at them! This can’t be good. Lill’s mission encounters a major problem that the Martians must resolve before they can start their trek to planet Zanda in the Andromeda Galaxy. The trip will take them too long to get there, so they must find a solution. What happens next in this galactic fantasy?

Jean grew up in the once active steel town of , . Since then, she has moved to the area and considers this her home. Shortly afterwards, she met and later married her husband Ken; now they have a home just northwest of .

She studied Journalism at Writers Institute and Finance at . Most of her life included working in Accounting and Purchasing. Although she liked working with numbers, she knew she had an aptitude for writing at an early age. Jean had poems published in Seacoast Life Magazine, Wide Open Magazine, and was a poetic contributor to The Copy Desk Flash, a school newspaper. Later she signed a contract with Creative Directions as a free-lance writer of verse for greeting cards.

It was her love of science and science fiction that prompted her to write her first children’s novel, “Lill and Mewe and the Secrets of Mars”, the first of her series. Her inspiration came with the birth of her niece Lily and shortly afterwards a nephew, Andrew. As with all children, she wanted them to enjoy reading…and there’s nothing like a good adventure.

Lill and Mewe Journey to the Ocean of Runa will be available very soon in print and ebook! In the mean time pick up book one Lill and Mewe and the Secrets of Mars!

The year is 2456MD, (Mars Date) however the story events are happening in present times. The Martians 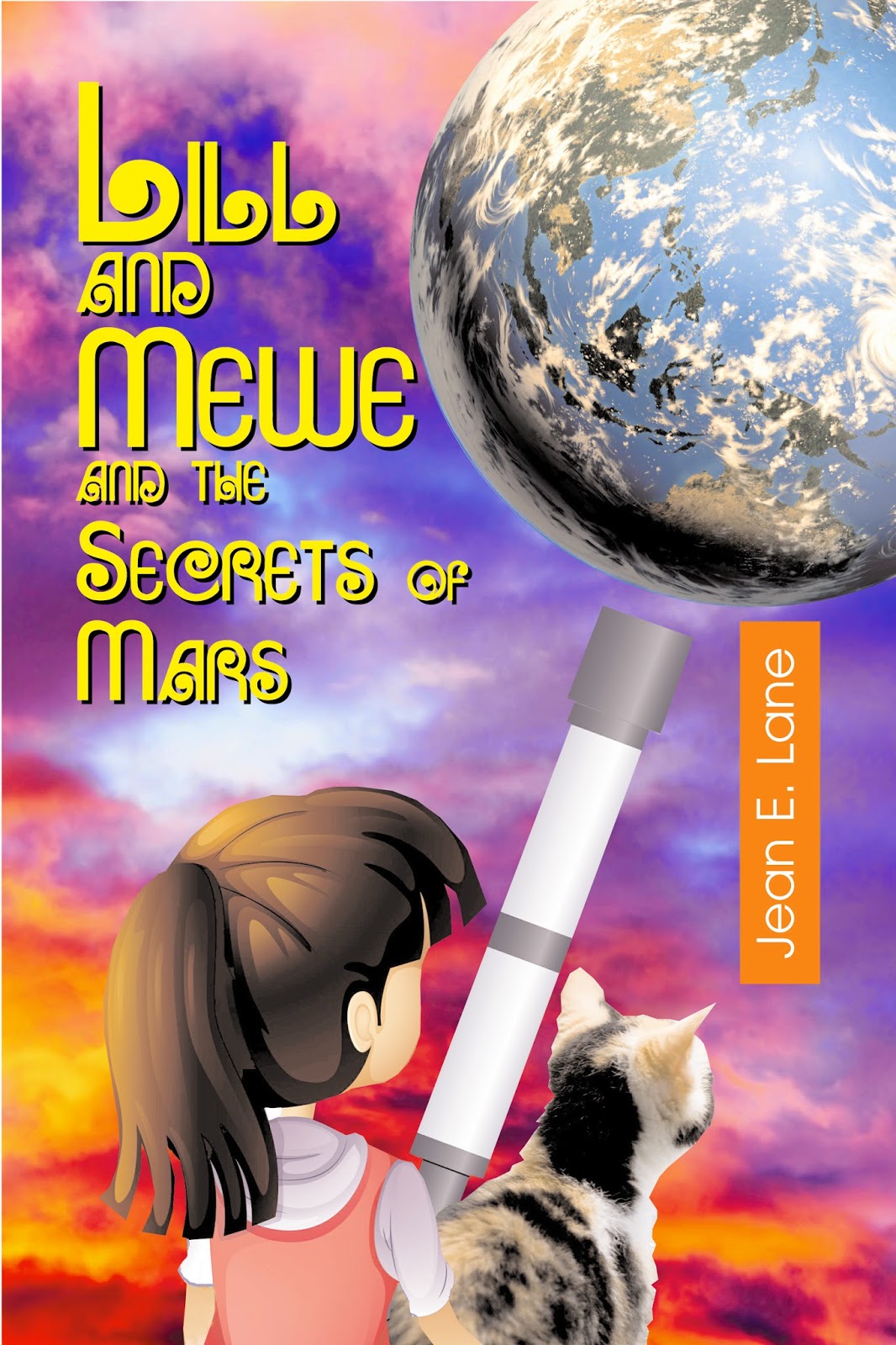 track time a little differently than us Earthlings. To the average eye, the planet Mars seems dead, uninviting, dusty, and void of water. I say life did exist there at one time, and still does; we just haven’t scratched the surface yet. Maybe there’s a lot more happening than we can imagine, just because you can’t see something, doesn’t mean it doesn’t exist right?

The secrets beneath the surface could tell another story. The story of Lill and Mewe, as told by Lill herself of how she feels about the lost history of Mars, her current life, and the great strides the Martians have made to recapture the advanced intelligence and technology of their past. It’s all about the role they play in our solar system and how they feel about us Earthlings. Are we even worth talking to? What could they possibly learn from us? Maybe we have more to learn from them, but are we willing to open our minds?