Sometimes I have a story in me that is not long enough to be a novel, but it is too long to be short story. That is when I write a novelette or a novella. The word novella is Italian, the feminine form of novello, meaning "new." Not only is it longer than a short story, but it is also more complex. It is usually comprised of approximately 20,000 to 50,000 words. In The New Yorker on October 29, 2012, in a article titled "Some Notes on the Novella," Ian McEwen made the following comment: "To sit with a novella is analogous to watching a play or a longish movie."

The novella's origin dates back to the early Renaissance in Italy and France, and it became legitimate literature in the late eighteenth/early nineteenth centuries. It was originally governed by precepts and rules and was limited to a single event, situation, or conflict. It was usually based on realism and presented a logical ending. In today's literary world, it lacks the subplots found in novels. Its main objective is to center around personal and emotional development of the characters.

Some examples of novellas are: Animal Farm, George Orwell, The Call of the Wild, Jack London, A Christmas Carol, Charles Dickens, The Old Man and the Sea, Ernest Hemingway, and The Time Machine, H.G. Wells.

The novelette is a work of prose fiction, longer than a short story but shorter than a novella. It generally consists of 7500 to 20,000 words. Its origin stems from the novella. At first it was considered to be sentimental and trivial, often regarded as something only women who were unsatisfied with their private lives would care to read. It was expected to present a love triangle and was quite predictable. It ALWAYS had a happy ending so as to restore people's faith in love and to leave readers with a feeling of security in an otherwise rebellious world. Critics used to label the novelette "vulgar" and "primitive." In short, the novelette badly influenced literary style, and in its day, those critiques may have been well founded.

But the novelette has undergone an evolution. It has evolved into a story that contains all of the things found in a novel, only shorter, and its reputation has improved. Today we find it in nearly every genre with exceptional popularity in fantasy (especially dark fantasy), sci-fi, romance, and horror. In fact, it is sometimes referred to a "mini novel." It is perfect for both writers and readers who do not have the luxury of spending the time necessary to complete an entire novel. Society has become more sophisticated, so the old requirements for writing a novelette have gone by the wayside. A happy ending is no longer necessary, and a writer can now decide how to end it, even leading to everyone's deaths!

Writing these "between" stories (referring to the length being between that of short stories and novels) means they no longer contain poor language and no style. They now contain solid construction with valid stories and plots, they now follow the rules of good writing, and they contain a less complex plot that fits the smaller length without forfeiting quality. The main focus is on writing a well-put-together story that readers will love.
Posted by Unknown at 12:00 AM No comments: 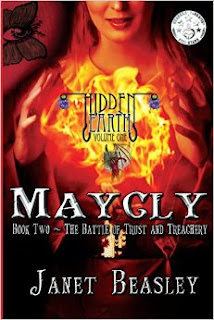 Today's excerpt is from author Janet Beasley's "The Hidden Earth Series: Volume 1 Maycly the Trilogy - Book 2 The Battle of Trust and Treachery."

Swinging the stick over his shoulder Charleo returned to the foyer. He flipped to the last page of the tablet and pulled from it the note he had written to Marlen. He laid it on the small table next to the door and placed a dancing-daffodil from her garden atop the note. He opened the front door and turned to take one last look at his home in its current state. Through the tiny window in the kitchen he could still see Marlen in the back yard. The boys skipped and jumped like boys do. He knew it would be a long time before he would ever see his home and family again...and he knew it would be different in the days to come on Maycly.

The door squeaked and latched behind Charleo as it always had. Rascally stood near the gate attached to the wagon. The horse pawed at the ground and whinnied low. Charleo approached him and gave him a quick pat on the nose. “Not this time big fella. I be a-goin’ on foot. I'll be aseein' ye again, but not fer a long time. Ye watch o’er Marlen and the boys fer me. Take ‘em ta town by way of the scenic 8 HIDDEN EARTH Volume 1 MAYCLY The Trilogy route, eh?” Rascally nickered softly and shook his mane so that it brushed Charleo’s face. Charleo could not help but cry. Rascally rubbed his cheek on Charleo's and dried the tears.
------------------- To discover more about this author, read 5 star reviews,  view book trailers, and/or purchase a print or ebook copy please visit Janet's author page on the JLB Creatives website by clicking here.
Posted by Unknown at 12:00 AM No comments: