Tools of Language and Expression - 3

Some tools of language and expression are not considered "good" writing but can be excellent tools if used properly and not overused, for grabbing a reader's attention, developing a particular type of character, expressing exasperation, etc. Let's take a look at alliteration, for instance. This is the practice of repeating a consonant sound in close proximity to others... 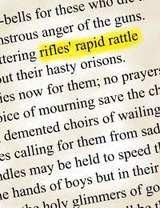 ...or beginning several words with the same vowel sound. 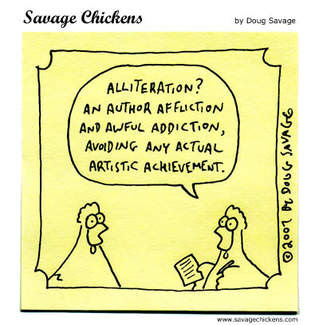 It's truly a fun thing to write alliteration, but if overdone it can be a real annoyance to a reader, and it can also appear comical in certain situations, possibly where you DON'T want it to do that.

Cacophony is the harsh grouping of words wherein the writer makes a phrase intentionally unpleasant to the ear when the spoken aloud. This practice is used to jar the dialogue or make a phrase particularly difficult to speak aloud.

Another tool that is considered generally "bad" in writing is an anachronism, which is placing a person, event, item, or verbal expression in the wrong historical period. Example: one would be hard-pressed to hear an Irishman in 1920 saying, "That's like totally awesome, dude!" Likewise, it seems pretty impossible that the ship in the photo below could actually be sailing on such a tiny trickle of water. 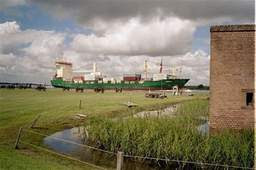 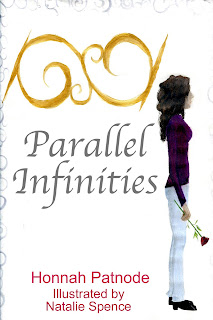 Today's excerpt is from author Honnah Patnode. Her novella is titled, "Parallel Infinities." Honnah is an accomplished writing enthusiast from the Advanced Journey to Publication Writing Program Curriculum.

The knocking sound rattled sharply within her skull again, faster and more insistent this time. The silver cord tugged at her, insistent to stitch soul and body together once more. Rosetta shook her head. Nothing made sense. No one could see her when she traveled like this, not ever. Not even those who joined her in an ethereal state of being could see her as more than a shadow, a footprint of her true self and no creature in a physical form was capable of peeking through the veil set between the skeletons and the souls. Who was this man? What was he? And why on earth had she felt so drawn to him when his voice had wrapped itself around her lungs and stolen her breath away?

"How is this possible?" The inquiry came out a whisper, and the unfamiliar man squinted at her with a mix of confusion, fascination, and curiosity swirling in his eyes. He should not be able to see her. She should not be able to interact with him. She wanted to believe that something was wrong, but it did not feel wrong. In a strange way, there was a certain gladness she felt at the thought of a soul that she could see.

The persistent knock tore through her mind again, loud enough to be a scream as it tumbled around inside her skull like boulders crashing down a mountainside. Rosetta tried to cling to the fabric of the fantasy, tried to snatch a piece of a world she could not touch and hold onto it until all waking moments left her to the blissful nothing in peace forever, but it was like trying to keep a dream in one's head after being forced to abandon it for the drudgery of morning. The waking world did not permit such things.
-----------------------------
To read more about Honnah and download her novella for FREE visit Honnah's Author Page on JLB Creatives.
.
Posted by Unknown at 12:00 AM No comments: Links to this post